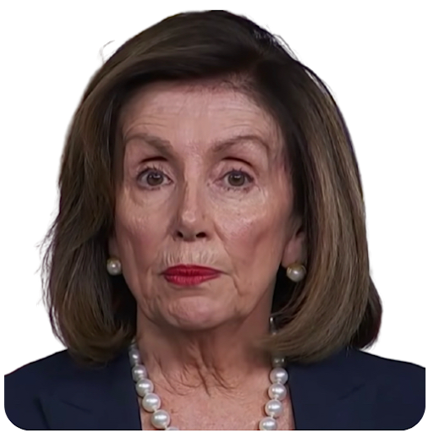 U.S. Speaker of the House

At the very beginning of the "pandemic" on February 24, 2020, Nancy Pelosi went on television and encouraged people to come to Chinatown in San Francisco in an effort to dispel anti-Asian racism due to the virus coming from China. This came after she criticized President for banning all travel from China. She was not wearing a mask, nor were the dozens of people surrounding her when she said, ""We want to see the people come to Chinatown here we are, we’re careful, we’re safe, come join us."

Pelosi would later blame "who are anti-science, anti-vaccination" Republicans for holding up a spending bill to fund the government because they opposed Joe Biden's vaccine mandates in an effort to get people back to work. This debate took place when 73% of Americans had already taken the experimental jab. She was joined by Senate Majority Leader Chuck Schumer who said, “If there is a shutdown, it will be a Republican, anti-vaccine shutdown.”

This conspiracy with Biden, Schumer, and other members of Congress resulted in billions of dollars in economic damage including loss of income and business closures. The forced vaccination of millions of workers resulted in an untold number of injuries, disabilities and deaths.

In true hypocritical fashion, Pelosi then voted to exempt herself and other members of congress from Biden's vaccine mandate.